AI and the Future of Autonomy

During her 35-year U.S. Air Force (USAF) career, Major General (Ret.) Kimberly Crider served as Chief Technology and Innovation Officer for the Space Force, Chief Data Officer for the USAF, and Mobilization Assistant to the Chief of Space Operations. Crider, now a Managing Director in Deloitte Consulting’s Government and Public Services practice, leads the organization’s artificial intelligence (AI) innovation for national security efforts. She is also a fellow at the Deloitte AI Institute for Government.

In these roles, she has spent decades close to the technologies employed by the U.S. military, and she brought these unique perspectives to the remarks she delivered during SparkCognition’s Time Machine Interactive, an event that featured energy, government, defense, manufacturing, and cybersecurity leaders all focused on identifying ways to bring AI capabilities into their organizations. 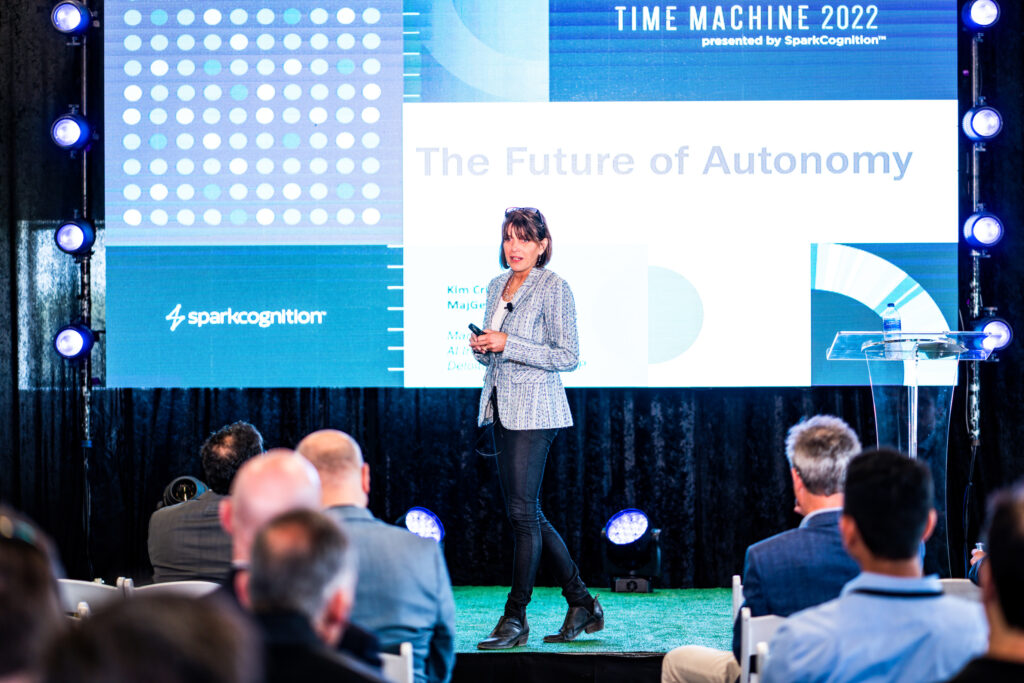 She began her remarks with a bold assertion. “The age of autonomy has arrived. Autonomous technology is here. It’s among us and accelerating very quickly. The future holds an endless number of potential applications. It’s not far out of our reach.”

Crider said that the ultimate goal of AI is finding ways to integrate it into our lives, both professionally and personally. And, like others who spoke throughout the day-long event, she stated that the key challenge is not mastery of the technology, but rather how we think about it.

“When you think about the larger implications,” she said, “that will determine the success of our scaling efforts and determine how and if we can leverage this capability to enhance our overall prosperity.”

Exploring further the role of autonomous systems, Crider stated that they are the ultimate force multiplier, enabling 24/7 operations and persistent intelligence, surveillance, and reconnaissance (ISR) capabilities. She added that AI-based technologies will take people further than they’ve gone before, allowing us to do things where we don’t want to go or where we can’t go. They can free us from routine assembly and other tedious work that people don’t need to do. And they can work in hazardous or difficult-to-access areas, providing the ability to detect and defuse bombs and IEDs, inspect unstable structures, and even go to Mars. AI enables us to address the dull, the dreary, and the dangerous, delivering real productivity and cost advantages. Finally, Crider asserted that robotic process automation (RPA) can save the U.S. society hundreds of millions of man-hours every day, which equates to billions of dollars.

Crider discussed several real-world examples of AI-enabled opportunities, including autonomous trucking. Deloitte says it can reduce per-mile shipping costs by at least 30% and double the daily range of trucks. Indeed, transportation in general is a vast opportunity space, whether cars, trucks, trains, or even tractors. Aviation executives are looking at air cargo autonomy by the end of this decade. And even in space, we are working on the implementation of satellite autonomy, enabling satellites to fly close to one another for maintenance, communication, etc. Autonomy will ultimately be viable in every one of our transportation domains: cars, ships, space, aviation, and more.

We also see it emerging in logistics and manufacturing. We can leverage autonomy to streamline the creation and movement of goods. We can address pain points and gaps, including intelligent inspection through the use of visual AI.

In defense, autonomy will continue to be a force multiplier on the battlefield. We see more and more the ability to increase speed, scale, and scope of combat operations, and to enhance multi-dimensional capabilities for the warfighter, including greater ability to self-repair and be self-aware. The Defense Advanced Research Projects Agency (DARPA) says they expect the appearance of technology in the next five years that will enable 1,000 or more drones to swarm and self-coordinate as part of a combat operation.

Crider offered a four-part framework for success in the AI space:

(1) Strategy—an important but often overlooked first step in any AI-enabled endeavor. Frequently we haven’t spent enough time on strategy, though, because we’re so focused on the technology itself. Returning to her autonomous trucking example, she posited important strategic questions: Where should we invest in autonomous trucking? Retail, shipping, or a transfer hub model? Where is the greatest opportunity? And how do you manage the integration between the manned vehicle and the unmanned one? It all requires strategy.

(2) Simulation (digital twins)—a critical need that more and more companies are evolving toward. We need to quickly develop models that can simulate the target environment and then work through the options being considered.

(3) Data and computing—Our systems are awash in data. But how will it all play out? Crider shared an example of air transport work recently done in Australia using the digital twin concept. The goal of the work was to better understand how to add different autonomous systems over time. As part of this study, they ran millions of scenarios to understand how to manage the complex variables that may come into play as you work through realistic scenarios. Performing such analyses places heavy demands on data and computing capability.

(4) Trust and ethical guidelines—We need to understand how AI systems came to the conclusions that they did. Crider shared a trustworthiness framework that includes elements like privacy, accountability, and reliability, asking the critical question, “If we don’t trust AI, how can we ever integrate it into the everyday fabric of our lives?”

Crider concluded her remarks by returning to the fundamental question of why AI and why now, concluding that the real goal is to create a safer world, to change the way we interact with one another. How will autonomy be leveraged, and what will be its ultimate impact on economic opportunity in the world, on global cooperation, and on competition among countries, whether on friendly terms or not? AI offers many of the tools and capabilities that will enable us to effectively address these questions.