Realizing the impact of AI in autonomous warfare

When considering the future of autonomous warfare capabilities, there’s value in looking at how automation and artificial intelligence have dramatically improved performance in industries such as petroleum production and commercial aircraft.

Both sectors operate using highly sophisticated, expensive assets composed of many smaller systems that produce constant streams of data that can be analyzed to make segmented improvements and studied to determine how the larger whole asset can be optimized.

During a recent presentation at Unmanned Maritime Systems Technology USA, Logan Jones, president of SparkCognition Government Systems, shared how the advancements made on the commercial side of artificial intelligence can effectively be used to optimize highly complex unmanned aerial and other warfare assets.

“If you look at commercial industry, the 737 is a great example. You look at where they’re driving automation, and it’s not just in the cockpit. It’s in the full workflow of an airline. They’re driving automation by pulling data off of the aircraft to understand when failures are going to happen, all the way to the luggage handlers about productivity, about safety metrics. They use that same data set to drive more effective training cycles into the training jobs,” he said.

“It’s really at the heart of strategic autonomy. It forces us as an industry to rethink how we complete a mission. It’s still an airplane. It doesn’t have a pilot, and you’re able to operate at an average of 13 hours on a mission set.”

Jones points out the data found in a 2021 analysis of manned versus unmanned aircraft that found substantial advantages in durability and performance for manned systems in large part because, to date, more attention has been paid to optimizing systems for aircraft with human operators onboard. 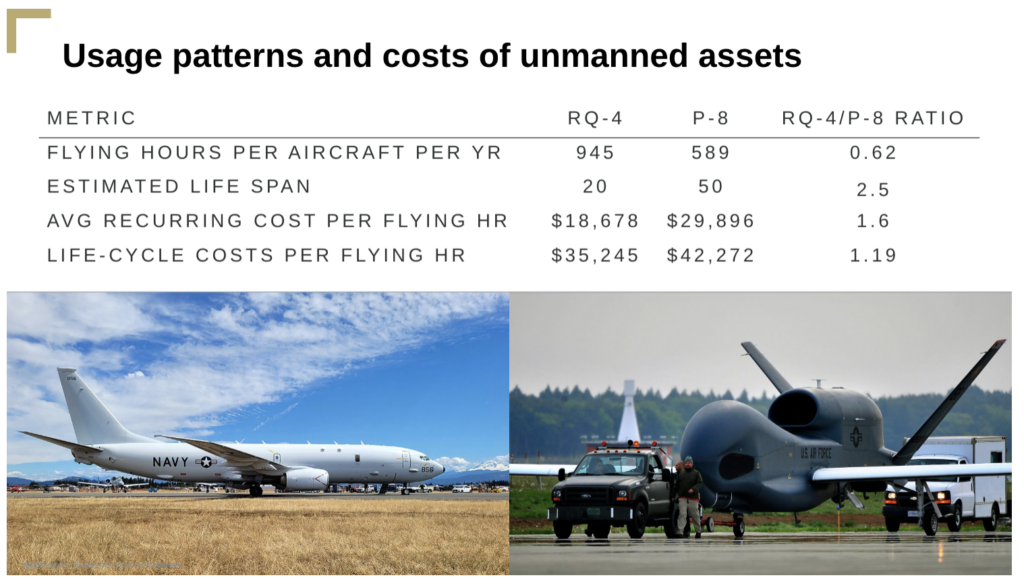 That means there are still major advancements to be made using AI to improve all facets of planning and execution of unmanned missions.

“The unmanned craft is still a complex system. It’s massive in scale, and it’s pretty expensive even though it’s cheaper than the P-8. We’ve automated a single part of it, but we haven’t thought about automation economy of AI and its impact on the overall flow of the mission all the way from reliability exercises through mission effectiveness,” he said.

“If you can do readiness and awareness better, you can respond quicker and more effectively. But we believe that’s only part of it. If you understood through a single solution by integrating data sets the asset health of tools that you have nearby and if you knew where supply was for and what the logistics implementation plan would be, not only is it improving your ability to identify threat indication warning. It’s teeing up a much more robust idea of true courses of action that commanders and operators need to make.”

And beyond making assets more long-lasting through improved operational steps, Jones said that AI can change the planning and execution of combat missions for the better as well.

“There is some technological innovation that’s required. We think of it in terms of this evolution of moving artificial intelligence from the operations center to the tactical edge. We think one of the key differentiators that Western forces have had for generations is the ability to push decision-making up to the NCO’s decision-making authority, and allow them to be nimble and agile with how they make decisions based on what they’re seeing every day,” he said.

“We think it’s about embedding algorithms and AI through every step of the journey. The implications are that you’ll be able to leverage a more diverse range of assets to effectively complete a mission. You’re not just unmanning an airplane and taking a pilot out. You’re thinking about the job to be done, and you’re using technology to do it more effectively and do it cheaper.”